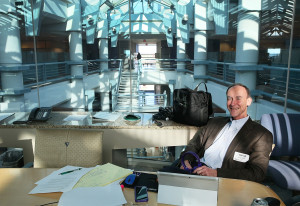 Richard Wronski is the Chicago Transportation Journal’s creator and editor. He is a veteran Chicago journalist, with more than 40 years of experience as a writer and editor at four daily newspapers.

In addition to curating the Journal, Richard is now a freelance writer, editor and consultant specializing in transportation and policy issues. He can be contacted at richardwronski67@gmail.com and his website, richardwronski67.com

He spent the past 26 years as a reporter and editor at the Chicago Tribune, most recently as one of the Tribune’s two transportation reporters.

He also covered issues like the Canadian National Railway’s controversial 2009 purchase of the Elgin, Joliet & Eastern Railroad and events such as the runaway CTA Blue Line train that crashed at O’Hare International Airport in 2014.

Richard was one of the first reporters in the nation to focus attention on the transportation of crude oil by train, inadequate safety of certain tank cars, the potential hazards these shipments pose to the Chicago area, and efforts by the federal government to ensure safety.

The Chicago Transportation Journal’s goal is to be the most comprehensive source of in-depth transportation news and information for the general public, commuters and transit users. It is an independent voice.

The Journal’s policy is to provide original reporting as well as aggregate transportation news from a variety of responsible media. Our intention is to be fair and accurate in our efforts. The Journal’s own reporting will be presented first and foremost, and will be clearly identifiable. When the Journal cites information from other media, that information will be readily acknowledged and credited.  We likewise require other media to fully and explicitly credit the Chicago Transportation Journal when rewriting or broadcasting the original reporting found on this site, which is copyrighted.

The Journal will also provide a forum for opinions from the public, transportation experts and public officials. Opinions will be clearly identified as such.

The Journal also intends to cover the aviation, trucking, freight and intermodal industries that make Chicago the transportation hub of the nation.

On occasion, the Journal may provide direct links to and convey statements and press releases from public agencies, officials and other entities. This  will only be done to provide factual information efficiently and will not, to the best of our ability, allow dissemination of  self-serving content on behalf of the provider. We retain the right to make this determination.

We welcome your feedback.