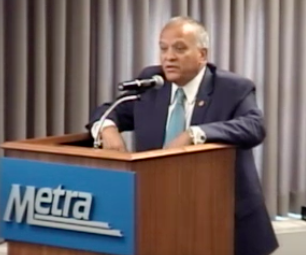 “Director Andalcio’s experience in business and government and his entrepreneurial leadership will add a vital and diverse voice to the RTA Board,” RTA Chairman Kirk Dillard said in a statement.  “He is an outspoken advocate for minority, disadvantaged, and women-owned business enterprises. His appointment is a great addition to the region’s transit leadership.” Dillard has not responded to a request for further comment.

Andalcio is CEO of Wynndalco Enterprises LLC and is a former appointee to the board of the Illinois Tollway. A post on Wynndalco’s website says that since emigrating from Trinidad, Andalcio “has remained loyal to his roots as an outspoken voice for Latinos in the U.S. and a deeply committed advocate for community empowerment.”

In a statement, Andalcio said: “As a longtime and active resident of DuPage County, I look forward to serving all our riders throughout the region, including those of DuPage.”

From 2013 to 2017, former federal judge Manuel Barbosa, of Mexican heritage, represented Kane County on Metra’s board. On Wednesday, a Metra spokesman said the agency had no comment on Arroyo’s statements.

Arroyo cited Metra’s vigorous campaign in Springfield this spring to secure funding for the agency’s capital needs, including new locomotives and coaches, and upgrades for bridges and stations. The lawmaker said drafting Rebuild Illinois was “not easy” and cost him “a lot of nights’ sleep.”

In contrast, Arroyo said, the board of the CTA, which almost entirely serves the city, was “very diverse.” There are Latino “doctors, lawyers and engineers” living in the suburbs served by Metra, he said.

Arroyo reiterated: “I help you, you need to help back. You need to have a diverse board.”

In 2013, Arroyo appeared before Metra’s board and asked that the Healy Station be renamed for Puerto Rican baseball Hall-of-Famer Roberto Clemente. No action was taken on Arroyo’s request.

Arroyo’s daughter, Denise Arroyo-Feliciano, is a $95,600-a year program administrator in Metra’s emergency preparedness office, according to a Regional Transportation Authority database.

In 2013, former Metra CEO Alex Clifford alleged that Arroyo had asked him to hire the lawmaker’s candidate for an open deputy director position. Clifford said he refused to take the name. Arroyo denied making recommendations or pressuring Clifford. Clifford was ousted by Metra’s board after making the allegations of political pressure.