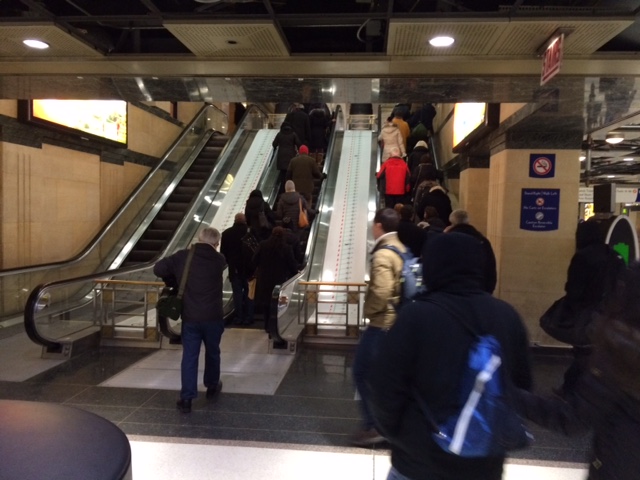 But money isn’t everything. Metra ought to be demanding that Amtrak do a better job of ensuring that commuters get better service. That means reducing the signal and switch problems that frequently cause delays for trains at Union Station. Or ensuring no more human screwups like the one that occurred Feb. 28 when an Amtrak…

Former Metra chairman and Chicago alderman Martin Oberman has been confirmed as a member of the U.S. Surface Transportation Board, the independent regulatory agency that oversees the nation’s freight railroad industry.

The U.S. Senate confirmed Oberman’s nomination late Wednesday along with that of Patrick Fuchs, a senior staff member for the Senate Commerce Committee.

On Thursday, Oberman told the Chicago Transportation Journal that he expected it to be an interesting, even “momentous” time for the board. There are a number of pending issues that could have a significant impact on the railroad industry, he said.

“I think the board will tackle some of those issues to see if changes should be made,” Oberman said, acknowledging that he was eager to learn more about the industry.

“After 50 years of practicing law, I like to think I’m still a fast learner,” he said. “I’ve been studying a great deal since (being nominated last year). I still have quite a bit of a learning curve, but I look at this assignment the same way as taking on complex litigation. You have to learn the law pretty quickly.”

Martin Oberman, the former Metra chairman and Chicago alderman, is being highly touted to fill a vacancy on the U.S. Surface Transportation Board, the regulatory agency which has broad oversight of railroads.

The Rail Customer Coalition, an association of trade groups representing major freight rail users, is strongly urging that President Trump nominate Oberman to fill the final post on the five-member STB, a seat which must be filled by a Democrat.

Oberman’s name emerged from a list of at least eight Democrats who were being considered for the nomination.

Oberman, 73, an attorney who built a reputation as a reformer while

on Chicago’s City Council, was named to Metra’s board by Mayor Rahm Emanuel in September 2013. He was elected chairman in 2014, serving until last October when Norm Carlson took over the post.

Reached Wednesday by phone — typically as he bicycled home from his law office —  Oberman declined to comment on the possible nomination.

The Senate Committee on Commerce, Science and Transportation approved the nominations of two Republicans, Patrick Fuchs and Michelle Schultz, as STB members on April 25.

All the nominations must be confirmed by the full Senate.

The Rail Customer Coalition is comprised of 29 manufacturing, agriculture and energy industry trade groups. In a letter Tuesday to Trump, it said “a fully staffed STB is critical to both the continued growth of the economy as well as furthering…

Former Metra Chairman Martin Oberman, who was credited with helping restore public confidence in Chicago’s commuter rail agency after scandal and controversy, departed the board of directors Wednesday.

Oberman, 72, an attorney who built a reputation as a reformer while an alderman on Chicago’s City Council, was named to Metra’s board by Mayor Rahm Emanuel in September 2013. He was elected chairman in 2014, serving until last October when Norman Carlson took the post.

Oberman tells Trains News Wire that he and Emanuel recently discussed his tenure and decided it was time to leave the board.

“He wanted me to focus on other areas,” Oberman says. “Nothing’s been spelled out yet.”

Metra has an 11-member board of directors appointed by the chairmen of the six Northeastern Illinois county boards, Cook County commissioners, and Chicago’s mayor.

Oberman said two key accomplishments that occurred during his term were helping to professionalize Metra and remove political patronage, and putting the agency on a more secure financial footing.

He refused to take personal credit.

“One person can’t do it,” Oberman says. “Whatever I was able to do required the support of the board and working with the executive director.”

Metra CEO Don Orseno will be leaving the agency this fall after serving more than 30 years in various posts.

Oberman took over at Metra after the agency came under fire for ousting former Executive Director Alex Clifford, who became embroiled in a dispute with some board members over political…