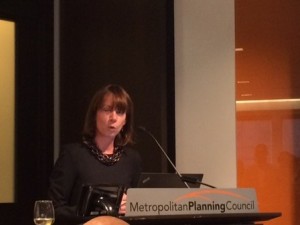 Sadik-Khan served as New York City’s transportation commissioner from 2007 to 2013, a tenure that was both transformative and turbulent. She won international renown for her efforts to tame the city’s notoriously clogged streets, turning scores of traffic areas into pedestrian plazas and carving hundreds of miles of protected bike lanes.

But while many considered Sadik-Khan a visionary, others found her divisive. As a top commissioner under former Mayor Michael Bloomberg, she was – like him — sometimes faulted for a “my-way-or-the-highway” style of leadership. Her programs drew frequent flak from politicians, businesses and community groups. As expected, the controversial Sadik-Khan was red meat for New York’s tabloids.  One columnist labeled Sadik-Khan the city’s “wacko nutso bike commissioner.”

Through it all, the outspoken Sadik-Khan never fled from a battle with a borough president or a clash with status-quo transportation doctrine. Thus, it’s no surprise she titled her new book, “Streetfight: Handbook for an Urban Revolution.”

Sadik-Khan spoke in Chicago Tuesday before more than 100 transportation officials and wonks as part of the Metropolitan Planning Council’s Urban Think & Drink series. It was clear many were fans.

For those not as familiar with Sadik-Khan, here are some takeaways from her address:

can now get home a little earlier each weekday.

On Monday, Metra inaugurated a 2:45 pm departure train from Union Station. The additional train boosts the number of Heritage Corridor runs from six to seven: three inbound morning runs and four outbound runs each weekday. The line has no weekend service.

The new train will make stops at Summit, Willow Springs, Lemont and Lockport before arriving at its final destination in Joliet at 3:50 p.m.

The Heritage Corridor is Metra’s least-used line, with only 2,400 weekday riders. By contrast, the Electric District line has 170 weekday trains carrying 33,500 riders, and the BNSF Line operates 94 weekday trains, with nearly 64,000 riders.

The new service is the result of years of effort by Metra and elected officials along the route to bolster the Heritage Corridor, Orseno said. The new service required agreements from the Canadian National Railway Co., which owns the tracks and operates freight service on the line, and Amtrak, which owns Union Station.

U.S. Rep. Dan Lipinski (D-3rd), whose district includes much of the Heritage Corridor, has pressed CN for years to allow Metra to add service. In 2013, Lipinski said he was so frustrated with CN that he considered introducing legislation to force the railroad to allow more Metra trains.