“We found that we could save some vehicles that we could then use for the Ogden route that we have wanted to put into place since the Southwest DuPage study that we did nearly 10 years ago,” he said.

Here are details, according to Pace:

The all-new Route 722 Ogden Avenue will operate approximately every 30 minutes Monday through Saturday between the Naperville Metra Station and Yorktown Center in Lombard. A portion of the new route overlaps the existing routing of Route 714 College of DuPage – Naperville – Wheaton Connector on Ogden Avenue, so Route 714 will be rerouted to provide new service to Diehl Road and Washington Street in Naperville.

In Naperville, Route 684 Naperville-Maplebrook and Route 686 Naperville-Old Farm would be combined into a single route with simplified routing, as the two current routes operate geographically close to one another.

Pace said it analyzed ridership patterns for both routes, and the combined route will serve the areas with the highest demand for ridership to lessen the impact on current customers.

As in Downers Grove, the new, combined routes would serve six additional Metra BNSF Line trains not met by the existing service.

In addition, Bolton addressed an often-asked question: Why does Pace’s existing Ogden Ave. Route 302 end in La Grange and not extend further west through communities like Western Springs, Hinsdale, Downers Grove and Westmont to Naperville? Doing so could connect a lot of potential riders with jobs and shopping, and serve as an alternative to the BNSF.

The reason, he said, is a lack of availability of vehicles and low density along long stretches of Ogden Ave.  However, “modifications to Ogden will be ongoing, so stay tuned,” Bolton said.

The goal of Pace’s new plan is to improve service and efficiency, and similar efforts have been implemented successfu 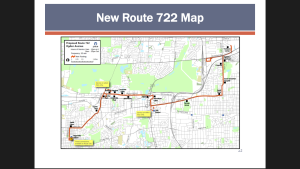 lly in other areas, according to Pace Chairman Richard Kwasneski.

“We encourage the people who live and work in the area to join us at our public forums and hearings to learn more about the service proposal, ask questions and provide feedback that we can use to shape the final plan,” Kwasneski said.

Detailed information about the proposed service plan is available here.

Based on the public input, Pace said the plans may be adjusted before the Pace board votes gives final approval at its April 13 meeting.

Here is the public hearing schedule: