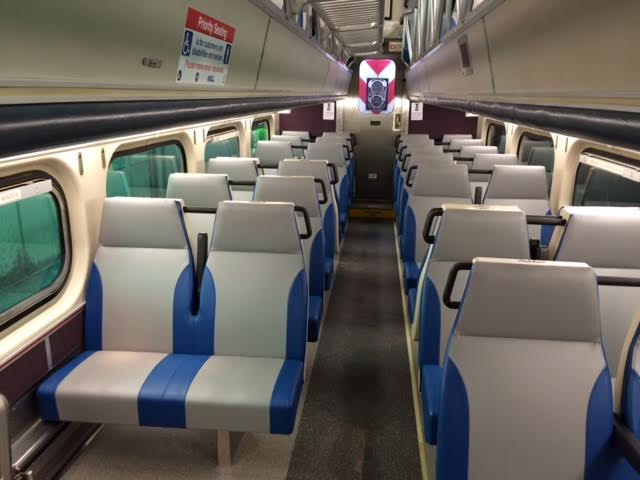 “We want to provide the very best customer amenities,” Orseno told the Chicago Transportation Journal, pointing to the cup holders and new electrical outlets on a gleaming coach that was recently rehabbed.

A previous sampling of riders’ opinions found that more than half preferred the new seats to the old ones, Metra said. Customers tested a prototype at Metra’s five Downtown stations in November 2014.

Metra officials said the agency is not paying extra to install the new seats, which are replacing ones that have worn out.

The new seats cost Metra the same as the older seats, but there are more manufacturers of the new style in the rail industry, and this is expected to keep the prices competitive and possibly drive down future costs, Metra said. The new seats are manufactured by Kustom Seating Unlimited of Bellwood.

The new seats are being used on 30 railcars going through Metra’s Amerail car rehabilitation program, with the work being done by Metra’s own personnel.

Metra says its workers have perfected a “streamlined” process by which railcars can be stripped and fully rebuilt in 32 days.

The entire Amerail fleet, built between 1995 and 1998, includes 97 railcars and 79 cab cars and is expected to be fully rehabilitated by the end of 2016, Metra said.

This work will extend the life of the cars by 12 to 15 years. With future rehabs Metra said it expects to extend the cars’ life to 50 years of service or more.

Metra said the work costs about $650,000 in materials and labor per car compared to $2.5 million to $3 million for a new railcar. This represents a savings of about 75 percent.