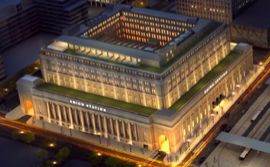 The penthouse would encircle but not block the station’s iconic 219-foot barrel-vaulted skylight that soars above the Great Hall. The skylight is currently undergoing renovation.

In addition to the hotels, a pool and fitness center would also be built, but on the station’s lower level. Developers assured those at the meeting, many of whom were concerned about the fate of the station, that the Great Hall would remain essentially as it was intended — for rail passengers.

Two hotel entrances would be added to the building, however. One would be on the building’s north side, Adams Street, and the other on the south side, on Jackson Boulevard. Windows would be installed on the station’s west side, facing Clinton Street.

The development plans were unveiled at a meeting called by 42nd Ward Alderman Brendan Reilly. The proposal must be approved by planning and zoning officials, and the Chicago City Council.

Ward Miller, head of the group Preservation Chicago, drew applause from the audience when he thanked developers for upholding the station landmark status on “one of the great stations of the U.S.”

Amtrak, which owns Union Station, selected Riverside and Convexity in May 2017 to redevelop the station and surrounding properties at a cost of $1 billion.

Union Station, with its multi-columned exterior, was completed in 1925. It was designed by Daniel Burnham and successor firm Graham, Anderson, Probst & White.

Amtrak has already allocated at least $14 million to restore the interior of the station to its classic beauty. The sweeping marble stairways leading from the Great Hall’s main waiting room up to Canal Street were replaced. The Metropolitan Lounge was relocated. Murals were being repaired.

Critics described that would-be addition as incongruous with the original building. Many labeled it “an abomination.”

In an understatement, Reilly acknowledged the community “wasn’t excited about the last plan.”

A version of this story appeared on Trains magazine News Wire.