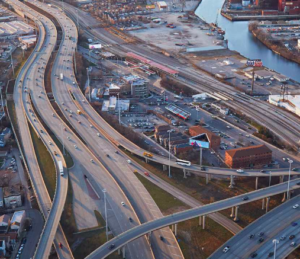 To maintain or improve the transportation system, the state and region must rethink current funding formulas and look for new revenues, the plan states.

For the near term, the plan calls for an increase of at least 15 cents per gallon in the state’s motor fuel tax (MFT), and indexing the tax to the overall rate of inflation. The current 19-cent rate has been unchanged since 1990.

Similarly, the federal gas tax, set at 18.4 cents per gallon in 1993, should be increased and indexed to an inflationary measure, improving solvency of the federal Highway Trust Fund.

However, the motor fuel tax no longer reflects the way people travel or the many types of vehicles on the road, the plan notes.

Although fuel efficiency has increased, with environmental and consumer benefits, MFT revenue has dropped. Projections suggest electric vehicles will become a much larger part of the fleet.

“Over the long term, then, the state and the federal government should replace their MFTs with a user fee that taxes actual use of the system, as with a per-mile road usage charge,” the plan says. This is also commonly known as a vehicle-miles-traveled (VMT) tax or fee.

Politicians in Springfield and Washington, D.C., have long treated the gas tax like kryptonite, fearing that increasing it would be political suicide.

In truth, the price of a gallon of gas fluctuates so much these days that an increase of a few pennies or even a dime would hardly be noticed.

At a public event a couple of years ago at Northwestern University, I asked House Speaker Michael Madigan, the most powerful official in Illinois, if he favored increasing the state gas tax. He said yes.

Has anything changed? No.

A future post will explore other funding options recommended in On to 2050.