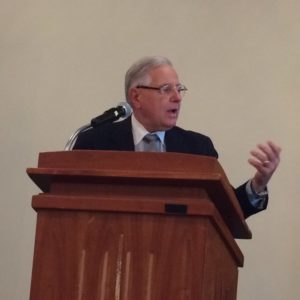 Thursday’s conference was intended to continue the discussion about prevention strategies, mental health awareness, and law-enforcement efforts to cut trespass and suicide incidents.

Several officials spoke on behalf of increased training of railroad personnel to better enable them to intervene in potential life-threatening situations.

The council honored Carlson and Metra’s board for launching the program as well as its own campaign to reduce the death toll from trespassing and suicide on the tracks. Last year, Metra held its own conference, “Breaking the Silence,” intended to focus more attention to a problem that the railroad industry has long treated as taboo.

In Britain, Network Rail has reported significant decreases in rail-related suicides with a combination of training; installation of physical deterrents and use of drones; and partnership with the emotional-help organization Samaritans.

“Our core belief is that suicide is not inevitable,” said James Buckley-Waterman, senior managing consultant with Network Rail Consulting. ‘We can work collectively to reduce the number of incidents.”