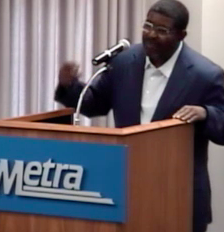 On any day, Hudson said, 12 to 14 of the 211 coaches in the BNSF line’s fleet are experiencing problems with air conditioning, with many cars having repeated breakdowns, Hudson explained.

“We are identifying the hot cars … we are getting people trained,” Hudson said. “We are trying to reduce the repeaters.”

Officials also blamed the problem on the aging coach cars, often about 30 years.

Three of Metra’s 11 board members represent areas with BNSF riders, and each took a turn venting over conditions facing passengers they hear from.

Naperville board member John Zediker pointed out that the BNSF Line has had poor on-time performance — below Metra’s goal of 95 percent — for many months.

“Between PTC and hot cars, this is the straw that broke the camel’s back,” Zediker complained.

Board member Stephen Palmer of La Grange told Hudson: “Thanks for coming. But we’re taking a lot of heat from customers and I don’t like it when I don’t have an answer for them.”

Steven Messerli, from Aurora, said Metra needs to do a better job of “PTC squared — the positive treatment of customers.”