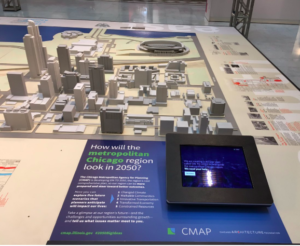 The chapter on mobility is subtitled Achieving a Safe and Reliable System for Tomorrow, and addresses these issues and more in some 80-plus pages.

As the chapter notes: “We cannot stand still, deferring important decisions that will shape the system for decades to come. In fact, while continuing to deal with past choices made or often deferred, our region must take bold steps both to address today’s problems and to anticipate opportunities for achieving a well-integrated, multimodal transportation system for seamless movement of people and goods within and through the seven counties of metropolitan Chicago.”

If you haven’t already read it, a draft of ON TO 2050 is available for public comment through August 14 at www.cmap.illinois.gov/ONTO2050.

The proposal makes many intriguing points: For example, ON TO 2050 sets a target of increasing the share of commuters who travel to work by a mode other than driving alone, while doubling transit ridership, as was the goal of the plan’s predecessor, GO TO 2040. “This requires changing the way that we build roads, transit, and our communities themselves,” the report says.

It also calls for harnessing technology to improve travel and anticipate future impacts.

And new sources of revenue are needed, the report notes:  “The region lacks a dedicated source of capital for its transit system, even as needs keep rising to maintain our aging system in its current state of repair. While improving the region’s infrastructure is a high priority, simply keeping the overall system of transit, roads, and bridges in its current condition will cost more than $200 billion over the 32-year planning period. Changing demands and emerging needs call for new investments.”

The document calls for an Increase in the motor fuel tax and replacement with a vehicle miles traveled fee.  Of the many states that have enhanced their transportation revenues in recent years, most enacted a MFT increase, the report notes.

The state should increase its MFT by at least 15 cents in the near term and index the overall rate to an inflationary measure to offset the long decline in purchasing power of the current 19-cent rate that has been in effect since 1990. Similarly, the federal gas tax, set at 18.4 cents per gallon in 1993, should be increased and indexed to an inflationary measure, improving solvency of the federal Highway Trust Fund without requiring non-transportation revenue infusions, the draft says.

The plan also notes that the state and region have insufficient revenues to fund operations and maintenance of the existing transportation system. “Broader implementation of tolling offers a clear path to rebuild the expressway system, while tying new fees to those who use it the most,” it states.

CMAP says it has already received thousands of public comments, via emails and gathered at several open houses.

One group, for instance, the Midwest High Speed Rail Association, is advocating that CMAP make its CrossRail Chicago proposal a priority in ON TO 2050. The proposal (www.midwesthsr.org/crossrail-chicago) calls for linking together the Metra Electric Line and Metra’s Milwaukee District West and North Central Line.

According to MHSRA, the program would consist of four major initiatives that eliminate bottlenecks and upgrade the entire route to modern standards with overhead electrification. It would separate passenger rail traffic from freight traffic, providing fast, seamless travel on clean, quiet electric trains.

The plan makes for some serious reading, and should prompt comments from anyone concerned about transportation, whether by car, bus or train, and freight rail, in the Chicago region.

Once the public comment period closes, GO TO 2050 will be revised based on feedback received, its print and online design will be finalized, and it will be prepared for adoption by the CMAP Board and MPO Policy Committee on October 10, 2018. The joint meeting will be followed by a celebration that all residents are invited to attend in downtown Chicago’s Millennium Park.