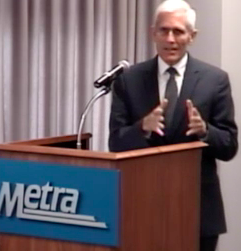 In addition, Mitchell said trains were now operating with the appropriate number of cars. One cause of recent overcrowding was that many cars were taken out of service for repairs. Mitchell  thanked Metra officials for shifting some spare cars to the BNSF to alleviate the problem.

Mitchell’s promises received a better reception than the excuses that the BNSF line’s mechanical chief, Sherwin Hudson, offered at Metra’s July board meeting. Hudson apologized for the problems but his attempt to explain the causes —  he cited a lack of repair shop time availability, a personnel shortage, and chronically clogged condensers on the AC units — failed to mollify three Metra board members who represent BNSF line riders. Each took a turn venting over conditions that stirred passengers’ ire.

Within the next 45 days, Mitchell said, officials would come up with a plan to address the overcrowding on the BNSF line.

Mitchell said BNSF will also seek to improve the line’s on-time performance, which has hovered around 91 percent, well below most of Metra’s other lines and below Metra’s stated goal of 95 percent. Mitchell said BNSF’s goal ought to be 97 percent. Metra considers a train on-time if it stays within six minutes of its schedule.

Mitchell also pointed out that certain BNSF trains are often more late than others. “We’re going to do a deep dive at specific trains,” he said.

Metra board member Steven Messerli said he was grateful for Mitchell’s appearance, but admitted it “would have been very helpful to have had you here 30 or 60 days ago when these problems started.”

“It’s good to have somebody from high up on the ladder (at BNSF) to address some of the issues we’ve been facing, said Messerli, who represents Kane County.

Messerli said this summer has been an embarrassment for BNSF but that the responsibility for the railway’s poor service “has come to land on us.”

“I’m glad we have an action plan. We don’t want to play the blame game,” Messerli said.

Stephen Palmer of La Grange, who represents Southwest Cook County, echoed Messerli. “You should have been here last month when we had your guys on the ropes,” he said. “But I’m happy to hear what you said and I’m looking forward to see the results of what you’ve talked about here.”

John Zediker of Naperville, who represents DuPage County, said he’s heard criticism from his own daughter, who told him, “Dad, what is going on with the BNSF? …  You guys can’t run a train on time.”

Still, Zediker commended BNSF for “attacking the problem” and said the road to improvement was a “two-way street, and we have to do our part, too.”

“When (the BNSF) doesn’t run on time,” Zediker said, “I hear from most of the residents of Naperville.”

A version of this story appears on Trains magazine News Wire