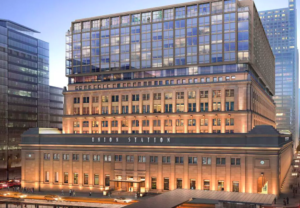 The two designs were clearly incongruous. Blair Kamin, Pulitzer Prize-winning architecture critic for the Chicago Tribune, said the addition has “none of the grandeur of Union Station (but) all the grandeur of a Holiday Inn.”

Amtrak would “not offer a characterization” on Riverside’s plan, a spokesman said.

Union Station, with its multi-columned exterior, was completed in 1925. It was designed by Daniel Burnham and successor firm Graham, Anderson, Probst & White.

Kamin has written that Burnham once envisioned Union Station as a magnificent gateway to Chicago’s west loop area, and that an office building had been originally planned for atop the station but never built, though foundations were laid.

An artist’s rendering with a suggested office tower and attributed to Joshua D’Esposito, former chief engineer for Union Station and Graham, Anderson, Probst & White, was published, but it’s unclear if this was the intended final product. 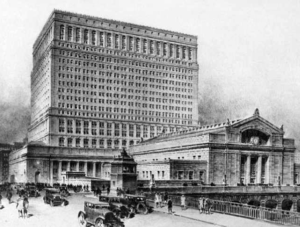 In 2002, another Chicago architect, Lucien Lagrange, unveiled a plan for a 400-foot tower above the station, with hotel offices and apartments. That plan fizzled. At least one other plan has come and gone.

Amtrak has already allocated at least $14 million to restore the interior of the Headhouse to its  classic beauty. The sweeping marble stairways leading from the Great Hall’s main waiting room up to Canal Street were replaced. The Great Hall’s 219-foot barrel-vaulted skylight is being renovated. The Metropolitan Lounge was relocated. Murals were being repaired.

So why stop there? Why not go all-out retro on the exterior as well as the interior?

A version of this story was posted on TRAINS magazine News Wire.