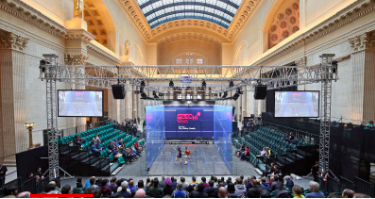 Union Station’s Great Hall is increasingly popular as a venue for public events. This week, it’s a squash court.

That’s right — squash, as in the sport played on a court with rackets and a ball. That’s different from the kind of squash played by Metra and Amtrak passengers who were herded into the Great Hall Thursday to wait for delayed trains caused by a signal system failure. Amtrak acknowledged Friday that an employee caused the problem while upgrading a server.

A four-walled glass court surrounded by bleachers (photo above) was constructed at the north end of the Great Hall to accommodate the Professional Squash Association’s world championships tournament, held this week through Saturday.

The $1 million tournament has attracted more than 100 top players from more than 25 countries. Reigning champions Mohamed ElShorbagy and Raneem El Welily, both Egyptians, are the top seeds. The top American in the tournament is Amanda Sobhy.

A bit unusual for a train station to hold a sporting event? Not necessarily, says Marc Magliari, a spokesman for Amtrak, which owns Union Station. The Professional Squash Association, based in Britain, has an affinity for iconic venues and has held tournaments in Vanderbilt Hall at New York City’s Grand Central Station since 2017.

Amtrak is happy to earn revenue by renting out parts of the facility to help pay the $22 million cost of renovating the famous Great Hall and its soaring 219-foot-long skylight, Magliari said.

“We believe there’s a market for the Burlington Room, the Legacy Club and parts of the Great Hall,” Magliari said. He wouldn’t say how much the squash association is paying.

Holding the squash tournament in a busy train station has the potential for luring many new fans, but the Chicago Tribune’s architecture critic, Blair Kamin, wondered if Amtrak was sending the right message by hosting such an event in the Great Hall while crowds of commuters wend their way through the warren of ramps, stairways and platforms across the street in the station’s concourses.

“To beleaguered commuters, the event must seem like Amtrak, the station’s owner, is fiddling with Roman-inspired architecture while they do a slow burn,” Kamin said. “Is this any way to run a railroad station — Roman imperial grandeur for the few, a rat maze for the many?”

Magliari disagrees. Amtrak’s improvements to the station are a work in progress, he insists, pointing to the renovation to the Clinton Street side of the station and installation of a new elevator making it more accessible under the Americans With Disabilities Act.

A version of this story originally appeared on Trains magazine’s News Wire.