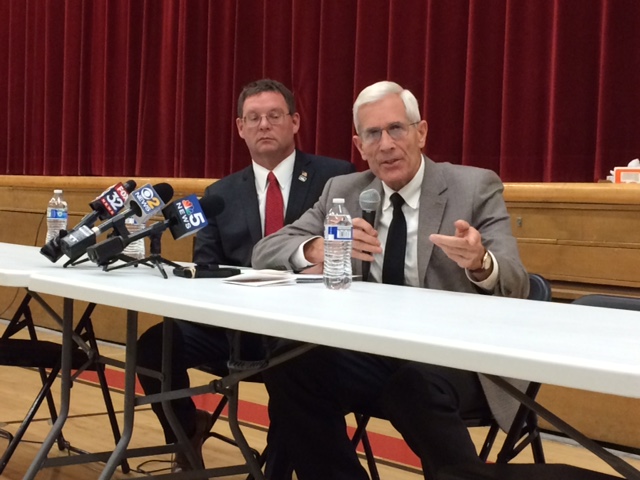 “We all understand that problems can occur, but this year the Metra BNSF line has failed all too often.  There have been repeated delays, cancellations, broken air conditioners, and other problems,” Lipinski said at the town hall. “I’ve told Metra and BNSF that this is unacceptable and the problems must end.”

Derwinski and Mitchell apologized to the audience of over 100 people, took questions and comments, while promising they would do their best to address problems on the line.

“This is very important to us,” Derwinski said. “No one wants to hear excuses.”

Mitchell pointed out that while he is based in based in Ft. Worth, Texas, where BNSF is headquartered, he was once a local resident and rode the line. “Lately, I haven’t been so proud” of the service, he said.

Mitchell promised to hold future meetings with the public to address complaints and report on progress. He even told members of the audience they could email him with their concerns at dj.mitchell@bnsf.com. (Metra takes complaints via its website, metrarr.com.)

The BNSF Line is the busiest of Metra’s 11 lines, carrying 64,000 riders a day between Chicago Union Station and Aurora. It operates on BNSF-owned tracks with BNSF crews. But the line’s on-time performance has hovered around 91 percent, well below most of Metra’s other lines and below Metra’s stated goal of 95 percent.

Last year was especially problematic, with installation of the Positive Train Control safety system on the busy rail line, which sees 94 Metra trains, 12 Amtrak runs, and as many as 60 freight trains a day.

Installation of PTC prompted rescheduling of trains to accommodate longer turnaround times. The new schedule was blamed for overcrowding, delays and the disruption of passengers’ habits. Most of the audience cited these complaints.

“I have nowhere to sit,” said one woman, who said she was expecting. “You have to address the overcrowding issues.”

Adding to the discontent were repeated breakdowns of the air conditioning units on the “Eisenhower-era” coaches that Metra says it cannot replace without additional funding from the state of Illinois. The state legislature has not approved an infrastructure funding measure since 2009. Metra is campaigning hard for a new capital funding program.

Derwinski said Metra operates with the oldest coaches and locomotives — the average age  30-plus years — of any commuter line in the U.S., but he said has been efficient and cost-effective in rehabilitating the equipment.

Mitchell had appeared before Metra’s board of directors in August and vowed to come up with a plan to eliminate the overcrowded and overheated cars.

Lipinski said he was grateful for the Metra and BNSF officials to attend the meeting and address passengers’ concerns.

“And they both know that I will continue to hold their feet to the fire until we get the service that we deserve,” Lipinski said.

An earlier version of this story appeared on Trains magazine’s News Wire.