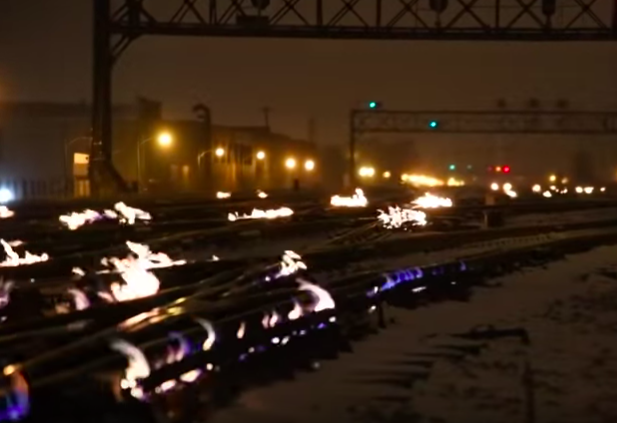 Reile said she heard from more a dozen media outlets from around the world, including Norway’s Dagbladet and the British Broadcasting Corporation.

Granted, the array of burners at the sprawling Metra interlocking near its Western Avenue yard (pictured above) is a dazzling sight. The burners are critical to keeping more than 300 trains a day passing through.

And despite the media attention, the heaters aren’t just used in subzero cold. The system is turned on as needed when temperatures are between 40 and 32 degrees Fahrenheit, and stays on when it’s below 32 degrees.

The Chicago media see the flames every winter and reporters know how the heating system works, but the out-of-town media love to perpetuate the “tracks-on-fire” myth, Reile said. Of all those reports, Reile credited Canada’s CBC Radio for reporting “Why Chicago’s commuter train tracks appear to be on fire.”

A version of this story also appeared on TRAINS magazine’s News Wire.