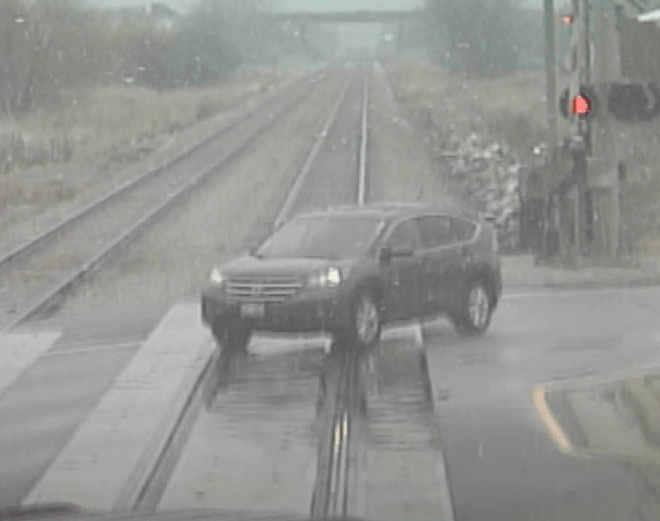 Stanglewicz should be congratulated for his quick reflexes, steel nerves, and, as the audio indicates, self-control for not uttering every obscenity in the book, as most everyone else would have done.  Stanglewicz also deserves some sort of public service award: Had he not posted the harrowing video on Facebook, it’s likely few would have ever known about the near-tragedy that morning. Posting it right before Christmas, Stanglewicz said he was simply expressing his thanks for being lucky to be alive.

It turns out, however, that the squad car video wasn’t the only one to capture bone-chilling moments that day. Metra trains have cameras, too, and in response to a Freedom of Information request, Metra was obliged to release the video from Train 506, just days before Metra’s monthly board meeting. That train video showed the incident from the engineer’s perspective.

Derwinski, to his credit, did better. He also presented the videos from two other trains showing  the gates malfunctioning at 191st Street that morning. One clip showed several vehicles, including a school bus, crossing the tracks with the gates up just as Train 412 bore down on them. Another video, from Train 416 shortly thereafter, showed the gates “pumping,” or going up and down, just as the train went through the crossing. These videos were taken before Train 506 had its near-miss.

What caused the problem? Derwinski, a former Navy electrician who worked his way up during his 20-year career at Metra, gave a highly technical explanation. But the quick answer was a short circuit in a track switch. It’s not that simple, of course. The complex system was designed with a failsafe so that if such a problem occurred, a trackside red signal would stop the trains. However, a separate, redundant signal in the engineers’ cab still flashed a green signal. And a human — a Metra dispatcher — then gave the trains permission to proceed.

According to Derwinski and a report issued by Metra, the first six inbound trains that morning passed through the area without incident. It was when Train 412 made its run that a problem was first noticed. The train encountered a red stop signal along the tracks about two miles from 191st Street. The engineer stopped the train. But the other signal in the train’s cab flashed green. The engineer called the dispatcher, who notified an employee known as a signal maintainer to find out what was wrong. Nevertheless, the dispatcher gave Train 412 permission to continue despite the stop signal.

The same thing happened with the three following inbound trains, 414, 416 and 506. They stopped for the red trackside signal, but got permission from the dispatcher to proceed anyway. Train 414’s video was overridden and unavailable, Derwinski said. Train 416’s engineer noticed the gates “pumping” and brought the train to a stop. Next came Train 506.

Derwinski noted that the engineer of Train 412, the first to get a stop signal (and who had sounded the train’s horn repeatedly as it passed through the crossing) failed to notify anyone about the malfunctioning equipment.

“That train (crew) did not report to our dispatcher that there was a grade crossing inactivation or a failure of an activation,” a somber Derwinski said. He added that he “can’t get in that engineer’s head” for an answer.

Why did that Metra dispatcher allow the trains to proceed despite a trackside signal telling the trains to stop? The signals — think of them as traffic lights — are the “vital system,” Derwinski said. Although the dispatcher sent a signal maintainer to find the problem, that worker didn’t get to the 191st Street crossing until five minutes before Train 506, Derwinski said.

It wasn’t until a later train, No. 508, that precautions were followed at the crossing. That train stopped before the crossing and a conductor with a flag got off and waved the train across safely.

So who is at fault? Metra would only say it “is reviewing the actions of its employees in regards to that day’s events and will work within its (union) collective bargaining agreements on any corrective or disciplinary steps.”

But why did it take Metra two separate “reviews” — one shortly after Nov. 9 and the other after the Stanglewicz video went viral — to discover there was a problem and what went wrong? Derwinski said that, at first, the incident was only considered a “gate malfunction” and didn’t rise to a serious level of concern.

After its reviews of the incident, Metra has implemented a new operating rule. In situations where engineers are given permission by dispatchers to pass a stop signal, they must then proceed at restricted speed of 20 mph or less. This will decrease the stopping distance in the event of a gate failure or other emergency. Metra said it has also “reinforced” the reporting procedures that crews must follow after a gate activation failure.

Metra insists safety is its top priority. Some may scoff, but it appears Metra and Derwinski are attempting to be transparent and accountable. He is scheduled to discuss the incident at a town hall meeting called by State Sen. Michael E. Hastings of Tinley Park at 6:30 p.m. on Feb. 12 at Lincoln-Way East High School in Frankfort.

Chairman Norman Carlson said the incident has “taken a personal toll” on Derwinski, who was appointed one year ago. He added that the incident has focused the railroad industry’s attention on the lessons being learned from the Mokena incident, and that the FRA was “pleased” with the way Metra was handling the matter.

Perhaps. The FRA’s staffers were furloughed as a result of the government shutdown, so the agency’s investigation will probably be slowed. But I’m told the agency is “well aware” of the seriousness of the Mokena incident.

In 2014, the FRA launched an investigation into three serious Metra safety violations, two of which were first reported in the Tribune. In two of the incidents, Rock Island engineers were found to have exceeded the maximum authorized speed, causing the trains to tilt precariously, passengers said. The other incident involved a Metra Electric District engineer who blew past a stop signal. As a consequence, the three engineers were decertified.  The FRA also has the power to impose civil penalties on railroads for safety violations, such as grade crossing and signal malfunctions.

According to the most recent FRA report, Metra agreed to pay nearly $33,000 in fines for 10 safety violations in fiscal year 2017. That doesn’t seem like much of a penalty. What will come as a result of the close call in Mokena remains to be seen.