Is Metra alarmed that ridership is quickly declining while employment in downtown Chicago is steadily rising?

Over the past five years, Metra’s ridership has slid 4.4 percent, and 2.2 percent last year alone.

The Electric District, serving the South Side and suburbs, plummeted 14.7 percent, the worst drop of Metra’s 11 lines.

The data was presented at Metra’s board of directors meeting Wednesday. Board members expressed concern, but alarm bells didn’t seem to be going off.

Here are some factors affecting Metra ridership, according to Ciavarelli:

As mentioned, board members seemed concerned, but not alarmed.

For example, Romayne Brown, who represents Cook County, questioned what happened to those Electric District riders. (In November, Metra revised the line’s schedule to “match train times with operating conditions and reduce congestion.”) Ciavarelli responded to Brown by saying that there’s been a decline in population density along the Electric District corridor.

Maybe. But are South Siders finding the CTA to be a better bargain?

A topic for another day, along with other thoughts. Comments welc 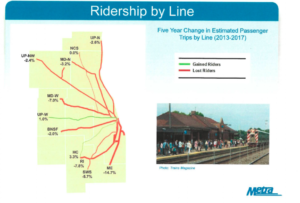 A version of this post originally appeared in Trains magazine.